These chords are an absolute 'must' for all beginners. They will set you on the right path and enable you to play the easiest of chords in preparation for the next learning phase.

Once you become proficient at playing these chords, it's time to move on to a more comprehensive range of chords including barre chords, power chords, moveable chords and we include enough chord theory along with easy formulas and examples to help you understand how chords are formed. Free software is available to view chords and notes over the entire fretboard.

Barre chords using the most common open-chord shapes - E shapes and A shapes, as well as the C shape and popular F shape Power chords - the most popular power chords with the root note on the 6th string and root note on the 5th string...If you love playing electric guitar with distortion, you can learn how to play power chords. They are easy and fun to play - and your distortion will sound a lot cleaner too!

These are chords that can be played over the entire fretboard using the same shape. They utilize open chords and barre chords in a variety of shapes depending on where the root note is located.

You can now play chords that are in closer proximity to each other rather than playing one chord on the first few frets, then having to swing by fret 7 for the next chord, fret 2 for the following chord etc. 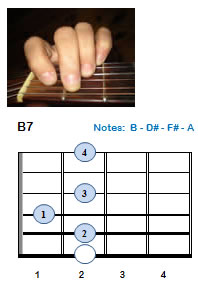 Each chord type has 12 chords, with each chord being displayed in 3 different positions on the fretboard. The chord charts display the finger positions for each chord as well as displaying the notes of the chord including fret positions, barre chords, open positions etc.

Our charts are displayed in a natural playing position, therefore you read the chart as if you are looking down on the guitar while you are playing. The nut of the guitar is on the left of the chart and the bridge is on the right with the opposite for left-handers. Once you get used to the charts, they become very easy to read. You no longer have to look at a chord chart and twist it round for it to make sense... you play it as you see it.

PS. The B7 chord displayed here includes an optional note (white circle) which is not normally played as shown in the picture - it would be written as B7/F# (B7 leading with F# bass note).

Although F# is part of the B7 chord (B-D#-F#-A), you normally lead each chord on the tonic which is B in this case.

If you do play the optional note, you will need to cover the 5th and 6th string with your second finger - a little awkward at first but much easier with practice.

Ron Brunton is a software engineer who has provided a number of free software applications that many of you will find useful - especially Unichord. Here's what he has to say...

Unichord is a program to show the finger positions and notes for any of the sixteen most common chords, in any key, on the fretboard of any fretted string instrument in any tuning.

The sixteen basic chords are available along with the seven modes. These can all be displayed using any tonic note (i.e. the finger position and notes for a minor seventh chord can be displayed for any of the 12 possible chords - Am, A#m, Bm, Cm, C#m, etc.).

Custom chords can also be defined. The displayed chord or mode may then be printed. In addition, the seven scale tone chords for any key can be printed, each on a separate fretboard.

This program is designed to run on Windows 10 but may run on earlier versions.

Many thanks to Ron for providing this free app along with many others. We found it very useful as the chord positions are available over the entire fretboard with the ability to switch between note positions and note names. All the popular chords are available and you can view the modes for each chord along with scale tone chords for all major and minor keys.

The app is ideal for all levels of experience.

While you're there, you may want to check out his latest version of Tabulatura (2.2.4.2) - Feb 2021 - a program that displays the instrument tablature for a tune or song on almost any fretted string instrument in almost any tuning.

You will need Adobe Reader (the latest version is recommended) installed on your computer in order to open and read all the free chord charts that you download. You can get Adobe Reader here (a new window will open so you can download it without leaving this page).