Just to add a little spice to our knowledge of scales we have included the following table concerning Scale Degrees which defines each note in a scale in several different ways. It is good practice to become familiar with all of these terms, as you will see them used often... very handy to know.

A Scale Degree is the name given to a particular note in a scale in relation to the tonic (first note), which is the most important note in a scale. They are defined by Roman Numerals, names, intervals, or notes of the scale. In the following table, we will refer to each note as numbered notes of the scale, i.e., 1st, 2nd, 3rd, etc. If we were to include the 8th note of the scale it is referred to as the Octave (upper octave) or Super Tonic.


Building Chords - Observations from the table above:

There are a multitude of chord types and extensions. Each type of chord has a formula which tells us which notes of the major scale make up each chord. 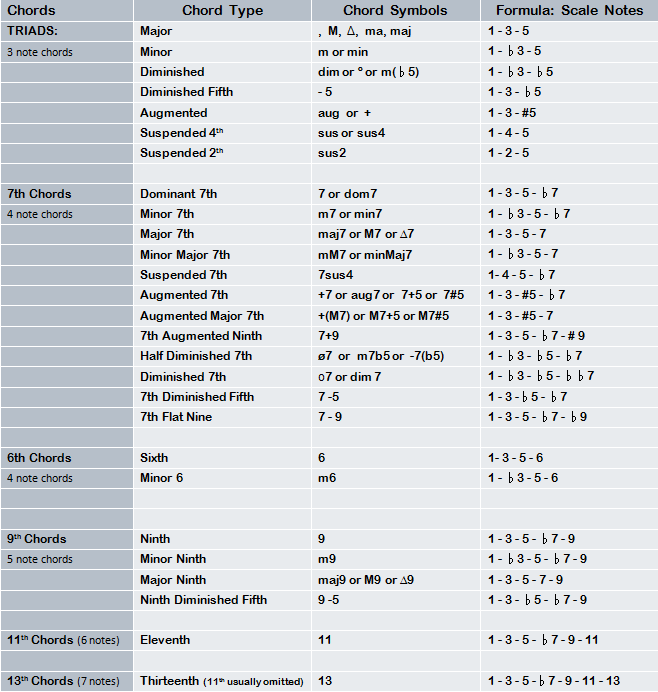 * When playing 13th chords, 7 notes are required. On a 6 string guitar, guitarists can only play 6 notes at any given time, so we generally omit the 11th.

Once you know your major scales, and know the formula for each chord type, you will be able to work out any chord on the fly. Next time you're at band practice and someone asks you to play a certain chord and you have no idea what it is, e.g., D half-diminished 7th, you simply use the chord formula for a half-diminished 7th chord (1 - ♭3 - ♭5 - ♭7) on the D Major scale (D - E - F# - G - A - B - C#), and substitute the specific notes of the scale with its alterations (♭) into your formula, and there you have it... D - F - A♭ - C. If you find this example a little difficult, we will look at a few more examples.

If you know your Scales along with the notes on the guitar fretboard, building chords will be a breeze. It's amazing what you will achieve once you become familiar with this, and as far as chord formulas are concerned, you may have to freshen up on some of the harder ones from time to time, but the more you use them the easier they become.

Back to Guitar Theory