Major Scales are diatonic scales made up of tones & semitones where each note has a different name. There are 8 notes in alphabetical order consisting of 5 tones and 2 semitones - the 8th note is the same as the first note, but is one octave higher. 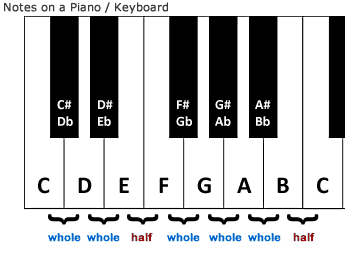 This in turn can be used to calculate all other Major Scales.

So how do we calculate Major Scales?

They all mean the same thing - some people prefer to use a Tone instead of whole tone or whole-step; a semitone instead of a half tone or half-step; a number representing total semitones instead of names... the choice is yours. The important thing is that you calculate the scale correctly.

The following is a number of examples using the step method of whole and half-steps along with tones and semitones to calculate Major Scales.

Below you will find a chart of all the Major Scales along with the order of sharps and flats.

Remember that we are dealing with diatonic scales where every note must have a different name. This means on a music stave, every note has its own line or space - no 2 notes are on the same line except in cases where you have an ascending and descending scale where the first and last notes are exactly the same...
C - D - E - F - G - A - B - C - B - A - G - F - E - D - C

In a major scale, the notes ascending and descending are exactly the same. If there is a F# ascending there will be an F# descending etc.

The following chart lists all the major scales, their sharps and flats and also the order of sharps and flats. This is a key signature and a very important part of music theory.

When I was learning music theory, my teacher gave me 'sayings' to help me remember the order of sharps and flats in any given key signature. The first letter of each word indicated the sharp or flat, and where the word lay in the sentence indicated its order. If you find these sayings hard to remember, make up your own and have fun with them. I use them all the time.

This order never changes... no matter what key you are in, the order of sharps and flats in a key signature is always the same.

You will need Adobe Reader (the latest version is recommended) installed on your computer in order to open and read this pdf file. You can get Adobe Reader here (a new window will open so you can download it without leaving this page).

Back to Music Scales Theory