The Stave is not alone!

A Key Signature consists of Sharps and Flats which are placed at the beginning of every Stave of Music to fix the correct pitch of the key. This tells us what key we are in, and which notes need to be altered in that particular key.

At the beginning of every piece of music, there are 3 pieces of information: The Clef, the Key Signature and the Time Signature. 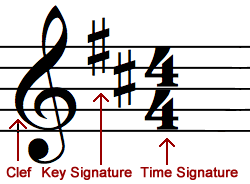 This particular key signature has 2 sharps: F# and C#. The purpose of this is to tell the musician that every time an F or C note is played, it must be F# and C#.

You can't mix up sharps and flats in a key signature. It exhibits either sharps, flats or no accidentals at all which means the music is in the key of C Major or Am.

To understand key signatures fully, it is good to know about major and minor scales and how they are constructed.

Without them, there could be 'utter chaos' on the Stave especially if you are playing a piece with a lot of sharps or flats in quick time. The following examples will help to illustrate this.

In this example, the piece is in B Major which consists of 5 sharps F# - C# - G# - D# - A#. Every time one of these 5 notes is played, it has to have a sharp in front of it, as there isn't a Key Signature at the beginning of the piece to tell us otherwise.

In this example, the piece is still in B Major but has a Key Signature. It fixes the correct pitch of each note within the piece. If there is an F# in the Key Signature, every time you play an F in the piece, it will be F#. The same applies to the other 4 sharps. (C# - G# - D# - A#)... neat, sweet and complete. Imagine trying to play this piece of music without one!

Order of Sharps and Flats...

Order of Sharps: Few Can Gain Distinction And Escape Blame

Order of Flats: By Energy And Diligence Good Children Flourish

Make up your own sayings. The important thing is that you remember them. You will find yourself using them all the time. Here are some others:

Order of Sharps and flats in 1 saying that makes sense:

On a Treble & Bass Clef:

Notice that the accidentals always lay within the confines of a Stave. This means they are not placed on any added ledger lines above or below the Stave. (You can see this in the chart below.)

Determining Key Signatures Manually - without the use of charts and aids

Let's say you don't have charts or other aids available. There are other ways...

To determine the natural minor key from a major key simply count down 3 semitones (minor 3rd) from the tonic of the major key... here are some examples:

Determining Sharps: Each scale starts on the 5th degree of each previous scale along with an extra sharp in the key signature. To determine whether the 5th degree is a sharp or natural key, simply count up 7 semitones. Remember that each Scale Degree or note must have a different name.

To determine the order of sharps and flats, make up or use one of the many sayings available where the first letter of each word represents the sharp or flat. Here's a good one where the saying incorporates both sharps and flats using the reverse order for flats... this way you only have to remember one saying.

Lets take C major as our starting point... no sharps or flats

Determining Flats: Each scale starts on the 4th degree of each previous scale along with an extra flat in the key signature. To determine whether the 4th degree is a flat or natural key, simply count up 5 semitones.

Lets take C major as our starting point... (no sharps or flats)

The following chart shows key signatures for every major and minor key: 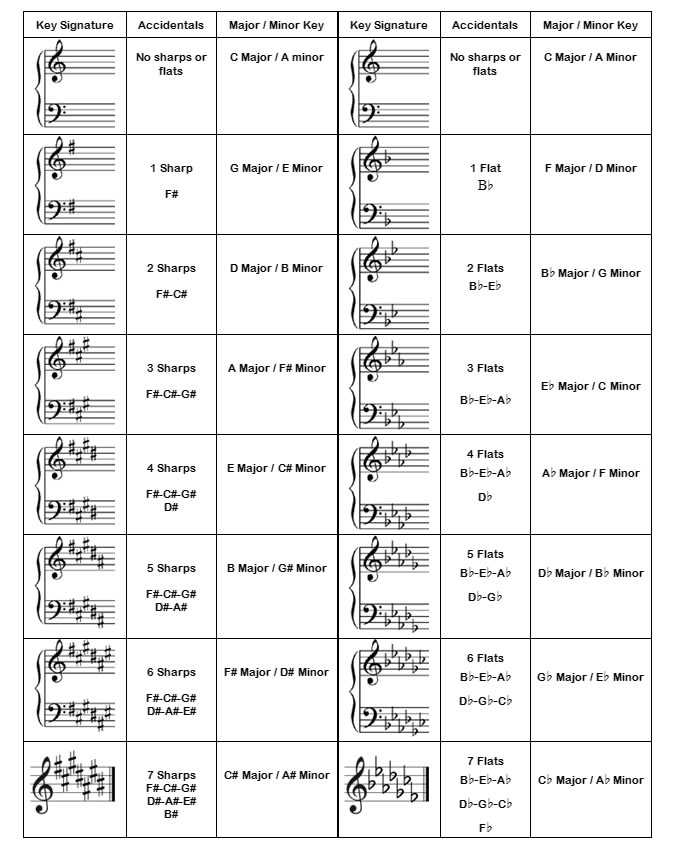 Finding a keynote from accidentals

To find the keynote from given # accidentals in the key signature:

In a Major Key, look for the last # to occur in the order of appearance of the sharps in the key signature, and ascend 1 semi-tone as that last sharp is the 7th degree or leading note of that key.
7th degree to the tonic = 1 semitone

To find the keynote from given ♭ accidentals in the key signature:

In a Major Key, look for the last ♭ to occur in the order of appearance of flats in the key signature, and ascend 7 semitones, as that last flat is the 4th degree or Sub-dominant of the key.
4th degree to the tonic = 7 semitones.

If you see no sharps or flats in the key signature, you are in the key of C Major or A Minor.