Barre Chords are formed when one or more fingers are used to press down multiple strings across the guitar fretboard.

The Barre: Place your first finger across all 6 strings on a given fret. Apply pressure evenly over all strings so that when you play each string, the sound of each string is crisp and clear. Barre the strings just behind the fret wire so that you don't experience any muffled sounds which will occur if you barre on the fret wire... this also gives you more room to play each chord with the other fingers.

In the diagram below, the first finger is used to barre the whole 1st fret.

There are certain shapes which are commonly used when playing barre chords, namely the E-shape chords and the A-shape chords. You play a certain shape and then by adding a barre with the first finger and retaining the shape, you move up the fretboard fret by fret... with every upward-fret, the chord played will be 1 semitone higher than the previous chord. The same applies as you move down the fretboard... the chord will be 1 semitone lower than the previous chord. You just need to adjust your fingers as you introduce each barre chord as your first finger is used for the barre, leaving your other 3 fingers to play the chord shape, e.g., A shape or E shape etc.

Here is a list of the most commonly used left-handed barre chords ...

Now the dreaded sharp and flat chords can be played easily and with the minimum of fuss. There are many options available to you and you will find yourself playing a mixture of open chords and barre chords depending on your requirements.

Please Note: The Root Note or Tonic of each E-shape chord is on the 6th string - Bottom E 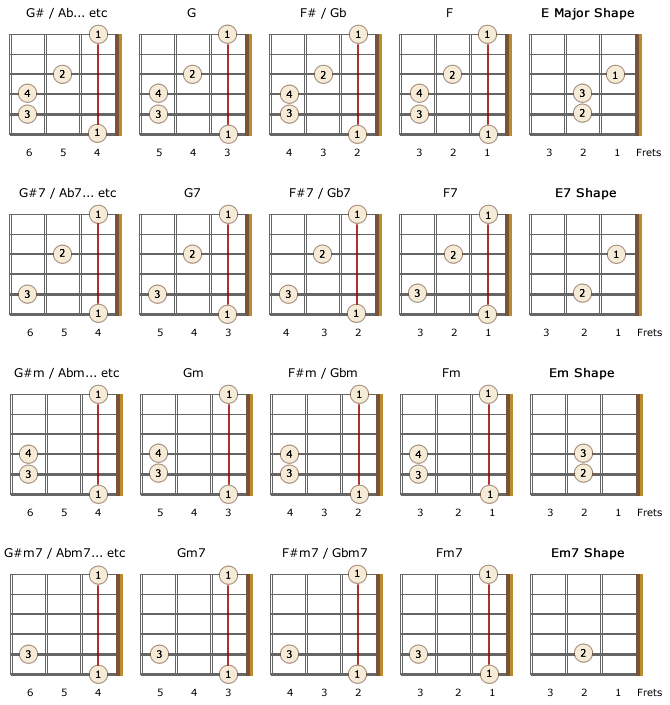 Please note that the E7 and Em7 shapes are the easiest of these shapes to play for the learning guitarist. There are other variations of these shapes which you will come across on the 7th and m7 guitar chord pages.

Please Note: The Root Note or Tonic of each A-shape chord is on the 5th string. 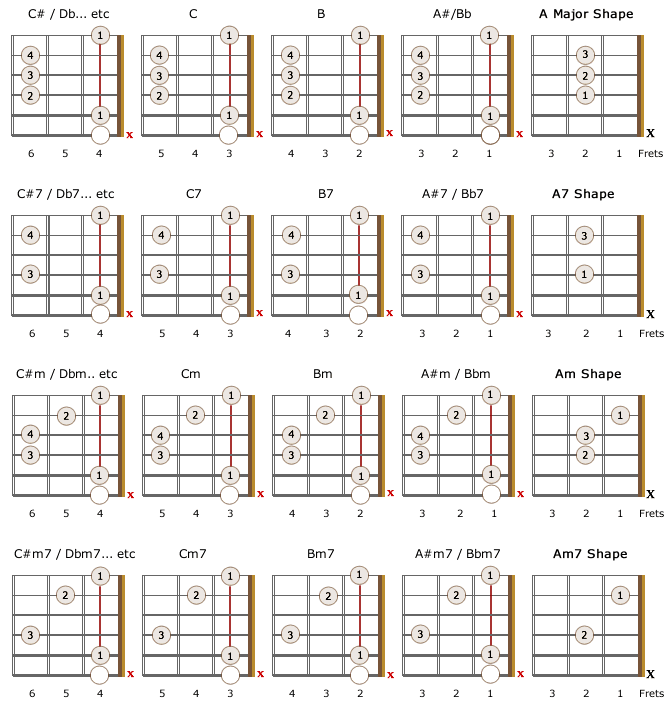 Using a small or half barre

Once you move past the A Major chord in the open position and continue up the fretboard using the A Major shape, the alternative to using fingers 2,3, and 4, is to use the 3rd finger over the 3 strings forming a mini-barre.

It takes quite a lot of getting used to is but do persevere with it. Your chord changes will be quicker as you only have to worry about 1 finger instead of 3. It also leaves fingers 2 and 4 free to play added notes, bass notes or chord extensions.

The hard part is getting the 3 notes using the mini-barre to sound clean (no muffled notes). Make sure you apply even pressure over the mini barre, and try not to touch other strings in the process. It take some time and lots of practice, but you will get there.

There are no steadfast rules... play in a manner that is most comfortable for you. If you find the mini-barre impossible after giving it your best shot, that's fine - use the 3 finger method. The important thing is that the correct notes are played - how you get there is entirely up to you.

Please Note: The leading Root-Note of each C-shape chord is on the 5th string.

The C Shape is harder to play than the E and A Shapes as it requires a fair stretch which beginners may find a little testing. However, it can be a handy alternative, especially higher up the fretboard where the frets are narrower.

Some of you may find it more comfortable to barre the whole fret or the first 4 or 5 strings of the fret which is fine as the correct notes are covering the extra barre with the 3rd and 4th fingers - just make sure you you don't play the 6th string unless you play the optional note on the 6th string directly above the 5th string note which means using your 4th finger to cover 2 strings. This is extremely awkward unless you have the hand span to match.

The open C chord is the exception as you have a spare finger to play the extra note if you wish. In this case you would use the 3rd finger on the 6th string and your 4th finger on the 5th string.

The C-shape is not commonly used as it requires a fair stretch and if you include the optional note, you will need to use your 4th finger to play both string 5 & 6. For larger hands this chord may be fairly easy to play, but if you are young with smaller hands or have trouble spanning 4 frets, you may want to avoid this shape.

Having said that, it does get easier to play as you move up the fretboard... the frets become narrower, and if you avoid the optional note, the chord is relatively easy to play, however it does take some getting used to! Stick with this one... very handy at times especially if you are playing up the fretboard and don't want to venture too far to play a particular chord.

The F Shape - not really a barre chord, but handy to know...

Please Note: The Root Note or Tonic of each F-shape chord is on the 4th string.

The F-shape is handy to know and is a good go-to chord when the E-shape barre chord can't be used, or you are after a chord that features the upper notes of the chord - the top 4 strings.

You will notice that if you barre the whole fret with your first finger and play the optional note, you are in actual fact playing an E-shape barre chord - so why use the F-shape?

There are certain situations where you want the higher strings of a chord to sound without too many bass notes. The ideal situation again is to use an F-shape chord and play the top 4 strings.

Because the open F chord covers all the first 4 or 5 strings, you can play it anywhere on the fretboard. You probably don't think of this as a barre chord, but I have included it as it works just like a typical barre chord, and we are using a mini-barre on the first 2 strings... a very handy chord.

Use your fret markers

Fret markers are extremely handy, especially when playing barre chords. They are great locators and act as a quick guide when fast chord changes are required.

Instead of counting frets, you can use your fret-markers to guide you. In time you will get to know where certain shaped barre chords are played e.g., A Major using an E-shape is played with the first-finger barre on the 5th fret. Looking at the image above the fret markers are located on the 3rd, 5th, 7th, 9th, and 12th frets. Instead of counting up to the 5th fret you simply start the chord on the 2nd fret marker which is the 5th fret.

The same principle applies to all other chords... F Major can be played using an A-shape starting with the first-finger barre on the 8th fret. Using the image above, this is located between the 3rd and 4th fret marker which is the 8th fret... you will save lots of time and energy as you don't need to count each fret before you play each chord.

The 12th fret string-notes (5th fret-marker) are one octave above each string-note in the open position. If you play a typical E Major chord in the open position and play an E-shape barre chord with the first-finger barre on the 12th fret, you are still playing an E chord except it is one octave higher in pitch. (Take the barre away and play the chord again - 3 notes will be from the original position while the other 3 are 1 octave higher. It has a very interesting sound which you will find yourself using time and time again.

The more the merrier!

Here is a small list of other chords you can use and the chord shape they are derived from along with the written chords/tabs in the original open position followed by the subsequent chords produced by a first-finger barre on frets 1, 2 and 3.

Remember... 1 fret = 1 semitone
Back to Homepage