E and A shapes

Barre Chords are a type of guitar chord where one or more fingers are used to press down multiple strings across the guitar fretboard.

Using a barre with a particular 'chord shape' and moving up one fret, sharpens the chord by one semitone. As you continue to move up the fretboard, every fret moved upwards is equal to 1 semitone.

Barre chords are often used in combination with open guitar chords. It adds a new dimension to your playing giving you greater flexibility and enabling you to play pieces you may have once avoided due to 'chord difficulty'. This is especially true with 'sharp' and 'flat' chords, e.g. A♭, B♭, C#, E♭, F#, and their respective minor chords etc.

The Major chord shapes you will learn in this session are part of the CAGED system which recognizes that thousands of chords are traced back to 5 common open major chord shapes referred to as forms. These open chords are C, A, G, E, D, hence the term CAGED... C Major, A Major, G Major, E Major and D Major... more.

As most of you are beginners, we will concentrate on the easiest shapes, namely the E-shape, A-shape and C-shape chords. We also take a look at the F-shape chord - technically, it incorporates the E shape form, but can prove handy in certain situations.

The most commonly used Barre Chords...

The most common shapes used when barring a chord are the E Shapes and the A Shapes.

It is important when barring guitar chords, that each string 'rings true' with no muffled sounds, except in situations that muffling is required like muffling unwanted notes or for playing with a desired 'effect'.

You will need to adjust your finger placement when you introduce your first barre. If you play an open E chord and then want to play an F barre chord, your first finger will barre the first fret, and the remaining 3 fingers will play an E Shape.

All finger positions are numbered on the chart just in case you become confused. Remember to take note of the frets. As you move up 1 fret, you move up one semitone.

When you barre with your first finger, make sure that you place firm pressure evenly along the entire fret. Don't barre the finger on the fret wire which are the lines dividing each fret, as you may experience muffled sounds. Barre the finger just behind the fret wire, so that you have enough room to play the correct notes with your other fingers.

It may seem very uncomfortable at first and your wrist, thumb and fingers will become tired. This is very natural, and remember that every guitarist has had to go through this at one time or another. Take your time. It may seem a little daunting, but be patient. With every day, you will notice improvements. The chords will start to sound cleaner and clearer. Your fingers will become 'fit' and what once seemed almost impossible, will become second nature. The ability to expand your repertoire tenfold will be well worth the effort... here we go.

Please Note: The Root Note or Tonic of each E-shape chord is on the 6th string - Bottom E

The E7-shape and Em7-shape chords are the simplest of these shapes. There are other variations which you will find on the respective 7th and minor 7th guitar chord pages.

Please Note: The Root Note or Tonic of each A-shape chord is on the 5th string. 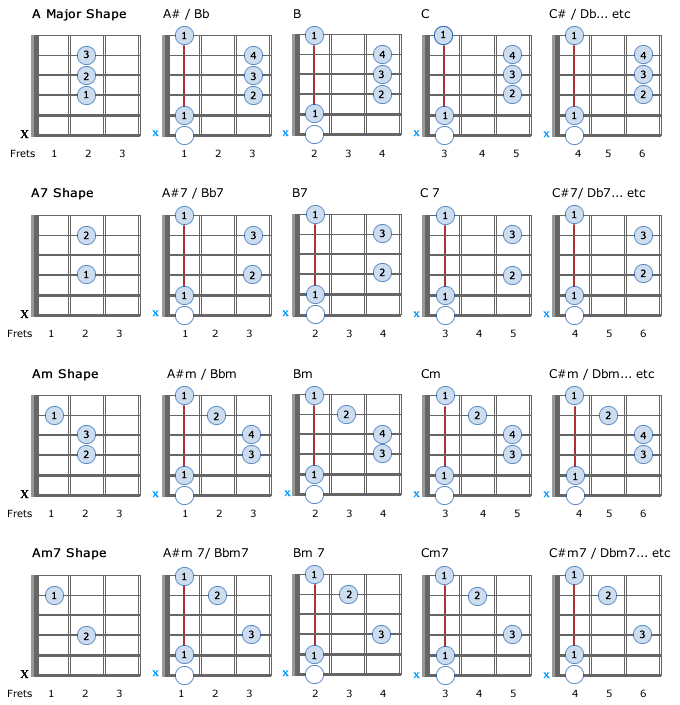 The A Form Chord - Using a small or half barre

Please note that when you play the 'A Major' shape and move up a fret (A# / B♭), you can use a small barre with your 3rd finger instead of using your 2nd, 3rd and 4th fingers (see diagram above). This is made possible because the strings that are being played are in a line on the same fret. You do this by placing your third finger over the 3 strings and applying firm pressure as you would for a full bar. Make sure you don't make contact with any other strings, as the sound of the chord will be affected.

It is quite difficult to do this at first as you tend to play a lot of muffled notes. Until you become familiar with it, I would recommend using the finger positions suggested on the chart until you become more comfortable with the overall concept of barring.

Everything takes time, so try to relax as you practice and above all don't forget the 'BIG P's'... PATIENCE & PRACTICE. With patience comes understanding... with understanding comes learning, and along with practice comes confidence... with confidence there is no stopping you!

Please Note: The Root Note or Tonic of each C-shape chord is on the 5th string. 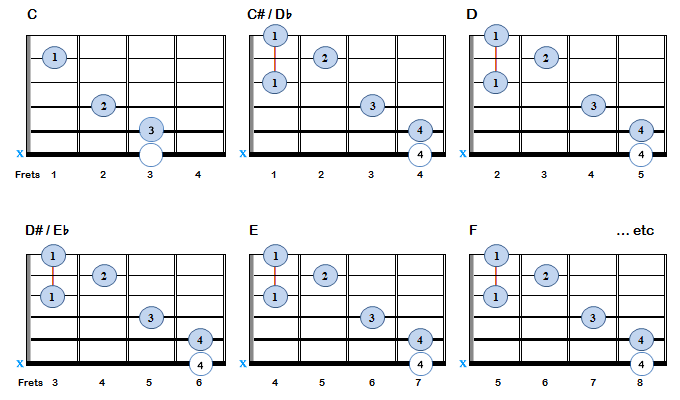 The C Shape is harder to play than the E and A Shapes as it requires a fair stretch which beginners may find a little testing. However, it can be a handy alternative, especially higher up the fretboard where the frets are narrower.

Some of you may find it more comfortable to barre the whole fret or the first 4 or 5 strings of the fret which is fine as the correct notes are covering the extra barre with the 3rd and 4th fingers - just make sure you you don't play the 6th string unless you play the optional note on the 6th string directly above the 5th string note which means using your 4th finger to cover 2 strings. This is extremely awkward unless you have the hand span to match.

The open C chord is the exception as you have a spare finger to play the extra note if you wish. In this case you would use the 3rd finger on the 6th string and your 4th finger on the 5th string.

The F Shape - not really a barre chord, but handy to know...

Please Note: The Root Note or Tonic of each F-shape chord is on the 4th string. 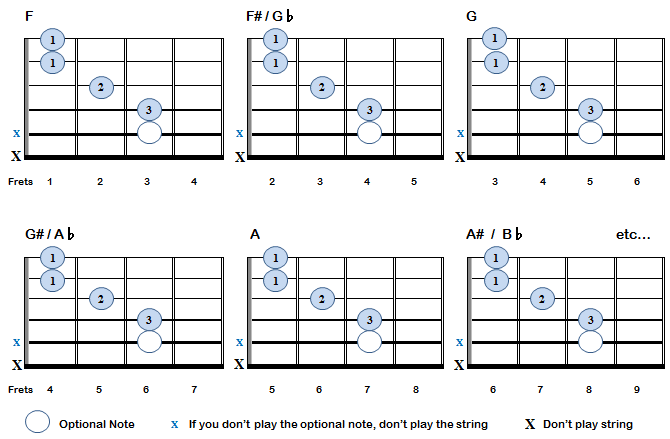 The open F shape is very popular chord. It isn't really a barre chord in the true sense although I have included it as it uses a mini-barre on the first 2 strings and because the first 4 strings are covered, it can be played all over the fretboard the same way as all other conventional barre chords.

Make sure you avoid strings 5 and 6, although if you are using the optional note on the 5th string, simply avoid String 6.

It's interesting to note that if you barre the entire fret using your first finger position and play the optional notes, you are in fact playing an E-shape barre chord. So why use the F-shape chord? Here are some of the benefits...

Observations... use your fret markers!

The more you play barre chords, you will begin to see patterns arise. On the fretboard, you will notice there are fret markers placed on 3rd, 5th, 7th, 9th, 12th frets etc. If you play an E Major Shape and...

If you are using an E Shape Barre and need to play A♭, you will find it on the 4th fret or between the 1st and 2nd fret marker.

If you are using an E Shape Barre and need to play B♭, you will find it on the 6th fret or between the 2nd and 3rd fret marker.

If you are using an E Shape Barre and need to play C, you will find it on the 8th fret or between the 3rd and 4th fret marker.

PS. Sometimes a barre chord is also referred to as a bar chord.

There are many shapes which are used in barre chords. The chord shapes mentioned above are the most common, but you will also find many other shapes very useful when playing barre chords. Whenever you find a chord you like playing other than the ones discussed earlier, add a barre and continue with that shape up the fretboard, and remember that the same principal applies to all shapes... 1 fret = 1 semitone

Please Note: The D Form and G Form chords can prove very difficult for beginners due to the amount of stretching required... the G form is definately the hardest.

When you feel you have mastered the above, try playing a D major or G major chord, and using the same principal, add a barre with your first finger and use fingers 2,3, and 4 to play the chord.

Move up the fretboard making sure you leave a spare fret between the bar and your chord shape - this is because each chord in the open position starts on the 2nd fret ... 1 fret away from the Nut. Your barring finger will become the new nut and the lay-out must remain the same.

Even seasoned players find the D and G form difficult so don't be too upset if you find it hard to play. If you just play for fun, you will most likely never use these forms. If you are a serious guitarist, stick with it. It will eventually fall into place and you will find yourself using different voicings for the same chord adding 'variety and spice' to your overall sound.

Try it for yourself: Play an open A chord then play an A chord using the E form (barre on 5); C form (barre on 9); D form (barre on 7); G form (barre on 2)...what do you think? The G form is very, very hard especially on the lower frets, but it does get easier as you move up the fretboard... frets become narrower the higher you go, easing the 'stretch factor'.

The following are a list of popular songs that include Barre Chords... open chords are not included.