Learning notes on the fretboard

When learning to play the guitar, it's a good idea to be able to identify the guitar notes on the fretboard. This will give you a great advantage in navigating your way around the guitar as well as constructing chords in a variety of positions - especially movable chords. 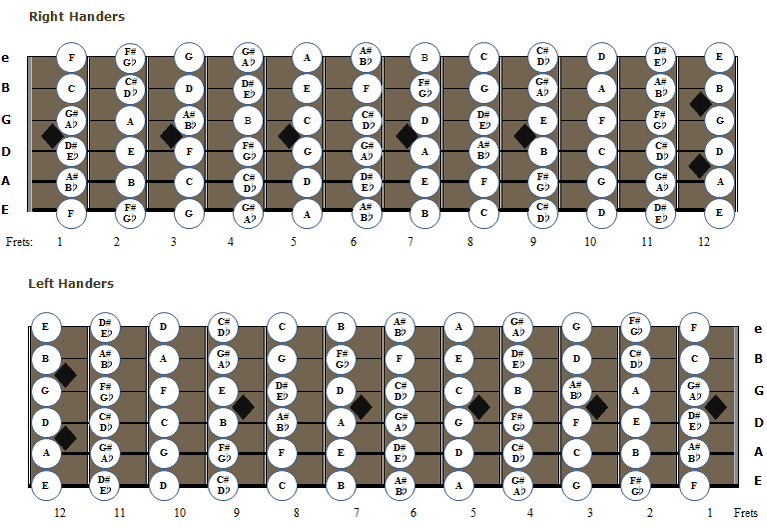 Please note that the first string on a guitar is Top E (string 1 - highest sounding open string), sometimes written as a lower-case 'e' to distinguish it from Bottom E (string 6 - lowest sounding string), written as 'E'.


Fret inlays or fret markers are a great guide for playing guitar whether you are playing chords, scales, or lead guitar. They are situated on the 1st (sometimes), 3rd, 5th, 7th, 9th, 12, 15th, 17th, 19th, 21st and 24th frets of most guitars. At the very least, learn the notes of the 1st string markers which are the same as the 6th string markers.

The same applies if you are playing a particular scale or a lead riff and wanted to start on a D note higher up the fretboard. Using the chart above you could start on the A string, 5th fret (3rd fret marker), or on the G string, 7th fret (4th marker), or even the D string 12th fret (6th marker). As a developing guitarist, you will find yourself using fret-markers time and time again... think of them as a GPS for your guitar.


Classical Guitar - Fret Markers on the top side

Fret Markers along top of neck

Some guitars have a marker on the 1st fret, with the majority of guitars having their 1st marker on the 3rd fret... see guitar above. Some classical guitars don't have a marker until the 5th fret which is usually situated in the form of a dot on the top-side of the guitar, and not on the actual fretboard as the picture above shows.

If you know the notes on the 6th string, here's a handy tip:

As long as you know the notes on the 6th string (fattest string) of each fret, you can determine each note on the other 5 strings of the same fret using the 5554 rule: This only applies to strings 2-5, as the 1st string is the same note name as the 6th string. Let's use fret 5 as an example... String 6 - fret 5 = A (see chart at top of page)

This gets you out of trouble if you don't have a chart or some other type of reference material close-by.

One Fret at a Time

If you know the open notes of each string, here's a handy tip:

As long as you know the notes of each open string from the lowest sounding E string (E) to the highest sounding E string (e) or vice versa, you can determine each consecutive note travelling up the fretboard, by simply counting up 1 semitone for each fret. Here's an example: Open 6th String (bottom E)

This also gets you out of trouble if you don't have a chart or some other type of reference material close-by.

Free software is available to view guitar notes and chords over the entire fretboard along with some other handy features including modes, scale-tone chords, intervals etc. Beginners will find this tool extremely useful along with musicians from all levels of playing experience... can also be used by bassists and mandolin players.

Back to Guitar Theory Back to Top