In this session, we will be looking at a general overview of different music chords and the intervals used to make up these chords.

Chords are made up of 2 or more notes played simultaneously. 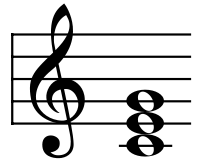 The most common chords are triads which are 3-note chords that are usually major, minor, suspended, augmented and diminished chords. These chords can be extended by adding notes forming seventh, ninth, eleventh and thirteenth chords.

Chords are generally classed by their root note; so for example, a C chord is built upwards from the keynote of C.

Music Chords have collective names, depending on the number of notes in the chord:

The majority of music chords are made up of thirds stacked on top of each other. They are either major thirds or minor thirds.

Let us look at the 4 common triads: Major, Minor, Diminished and Augmented triads. (We will illustrate using the scale of C Major) We will also use a chromatic scale which means we play all the notes in half steps or semitones which is the shortest distance between notes.

In popular music, a music chord is composed of several parts:

Triads are 3 note chords consisting of the 1st, 3rd and 5th notes of a major scale.

Extended chords are 3-note chords or triads with extended notes beyond the 7th resulting in 9th, 11th, and 13th chords. Any notes added in 3rds after the 13th will simply copy notes already in the chord. The following will help to explain this.

Notice that 9th, 11th and 13th chords are built on dominant 7th chords where the 7th degree of the scale is flattened. Also notice that,

A sus chord or suspended chord is a 3 note chord or triad where the 3rd is omitted. This is replaced with a major 2nd or a perfect 4th. It is a music chord having a root, a major 2nd or perfect fourth (no third), and a perfect fifth. This results in two main chord types:

Wow, what a session. Don't worry too much if this doesn't make a lot of sense. Just take a deep breath and revisit Music Scales and Music Intervals. Here you can review any areas that might be causing you some difficulty. I have only given a general overview of music chords, but certainly enough to give you a basic understanding of what chords are made up of.
Back to Music Chords Theory