Capo on 1st fret if playing with the video

The Relative Major Key of Dm is highlighted (F) - Transpose to any other key.

Please Note: When playing Bb6, it may be easier to barre the first fret (strings 1-5). It has no effect on the sound as the notes are all covered by the fingers on the third fret... and it may be a little more comfortable.

C9 is a great chord to learn - with practice, its very easy to play and you'll find yourself using it time and time again. 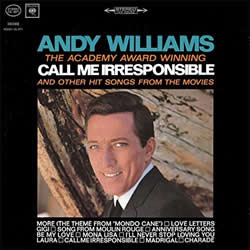 Other Andy Williams songs on this site:

Back to Popular Music Back to Top