The Rhythm of the Music

A Time Signature consists of 2 figures in the form of a fraction, placed together at the beginning of every piece of music to fix the time of the rhythm of the music.

Time is divided into 2 classes: Simple and Compound

Each class contains 3 kinds: a) Duple b) Triple c) Quadruple

When a dot is placed after a note, the time of the note is increased by half again.

Accent is stress or emphasis on certain notes. When the accent is moved to a weak beat, Syncopation is formed.

Normally the accent would be on beats 1 and 3, and with syncopation, beats 2 and 4, e.g. reggae. But in this example, the syncopated beat lies beyond the normal beats in the bar... & of 4&.

The following is an excerpt from Wikipedia...

Technically, "syncopation occurs when a temporary displacement of the regular metrical accent occurs, causing the emphasis to shift from a strong accent to a weak accent." "Syncopation is," however, "very simply, a deliberate disruption of the two-beat or three-beat stress pattern, most often by stressing an off-beat, or a note that is not on the beat..." more

The Use of Simple & Compound Time Signatures 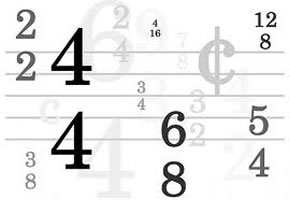 Simple Time Signatures and where they are used

4/4 : Common Time - Widely used in most forms of Western popular music. Most common time signature in rock, blues, country, folk, funk and pop including a wide variety of modern genres introduced over the last few decades.

2/2 : Cut Time or Alla Breve - commonly used in fast orchestral music and marches. You will also find it in musical theatre and some forms of popular music.

4/2 : Never found in early music and rare since 1600, although Brahms and other composers used it occasionally.

3/8 : Also used for the above, but usually suggests a faster tempo.

Compound Time Signatures and where they are used

12/8: Commonly used in slow blues. It is also known as the doo-wup or shuffle. It is being used in some forms of rock music and you will hear it in some jigs... a popular example of this is The Irish Washerwoman.
Back to Music Theory