Valuable Concepts for the Learning Musician

Transposition is the transferring of a given passage of music, interval by interval, to a different key or Clef.

1. Clef Transposition: A melody can be moved from one clef to another. This can be 1 or 2 octaves from the given melody above or below, or it can be transferred from one Clef to another at the same pitch.

2. Key Transposition: The whole passage or piece is moved from one key to another, interval by interval, corresponding to the construction of the given example. It may also be transferred from one clef to another as you change the key.

The subject matter may be transposed any interval desired - Major, Minor, Augmented, Diminished or Perfect

Transposition is the changing of the pitch of the composition without altering the construction of the intervals. Each Interval MUST match the given Interval in accuracy, according to the Key of the original example.

All accidentals MUST receive the correct attention to conform with the required key when the transposition is being made.

Let's say we are playing a song in the key of C Major.

After playing with it a few times we realize that the key is too low. We need to raise it a little. Let's try transposing it up to the key of D Major which is one whole tone (2 semitones) higher than C Major. We will use semitones as it is less confusing when you are learning. Here we go ..... C major to D major.

There you have it. You have transposed from C Major to D Major.

Try other examples for yourself. If you are unsure of the accuracy of your transposition you can check it out in the Scales chart.

Legato is to sing or play a passage smoothly

Staccato is the opposite. It means short and detached and definitely not smooth.

There are 3 kinds of staccato:

In the first bar, the Dot Staccato applies to both notes on each stem as above. In the second bar the dot staccato only upplies to the upper notes of each pair as they are on separate stems

A slur is a symbol placed over or under a series of notes. It indicates that the notes are to be played without separation. This implies legato which is playing a passage smoothly. The notes are different pitches and can be different types. A slur can extend over two or several notes at a time, sometimes encompassing several bars of music.

The Slur For Different Instruments:

Bowed string instruments: indicates the notes should be played in one bow.

Wind instruments: indicates that the notes should be played without using the tongue to re-articulate each note.

Guitar music: indicates that the notes should be played without plucking the individual strings, i.e. slides, hammer-ons and pull-offs.

In vocal music, slurs are usually used to mark notes which are sung to a single syllable.

An example of a slur

The tie is a curved line that links two notes of the same pitch to show that their durations are to be added together. 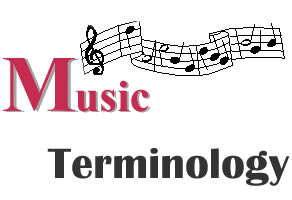 Enharmonic change (alteration) means that the alphabetical name of the note is changed on an instrument but the key on the instrument is retained.

For example, each key on a piano can have 3 distinct names with one exception which can only have 2 (G# - A♭). The reason for that is because G# or A♭ are sandwiched between two other black keys. With no extra space, there is no room for another name. Ok, let's look at all the notes in the scale.

If you have a keyboard handy, try this exercise for yourself.

Reference is made to this in the Major-Minor Scales Chart

Modulation means the transition of changing from one key to another, usually in the middle of a piece of music. This may or may not be accompanied by a change in key signature. There are a number of rules and considerations to take into account so that the transition from one key to the other is as smooth as possible.

The following is an excerpt from 'The Guitar Handbook' by Ralph Denyer. This is his introduction to the concept of modulation. He goes on with a detailed and concise explanation about modulation using primary chords and secondary chords along with and a very handy chart-application encompassing all keys.

Every major key is related to a minor key. The relative minor scale begins on the 6th note of the major scale with both scales sharing the same notes as well as the same key signature. Because of this, the following explanation of modulation need deal only with major keys...

If you are a serious guitarist and want to know everything there is to know about a 'guitar', this book is definitely worth a look at.

Accent is stress or emphasis on certain notes. When the accent is moved to a weak beat, syncopation is formed.

Syncopation is the placing of a regular accent formed according to the given time signature onto a normally unaccented beat or part of a beat.

In normal Duple, Triple and Quadruple Time, the accents are as follows:

When we use syncopation, the accents are altered. This tends to define different styles of music.

For example, in reggae music (quadruple time) the strong accent is placed on the second beat rather than the first beat, giving you that distinctive reggae sound.

A Tetrachord is a series of 4 notes in alphabetical order consisting of 2 tones and 1 semitone.