The Bass Clef or F Clef

Learning Notes on the Bass Clef

The Bass Clef and the Treble Clef are the most commonly used in today's music, with the Alto and Tenor clefs used to a lesser degree.

Instruments using the bass clef include bass guitar, double-bass, bassoon, contrabassoon, cello, euphonium, baritone horn, tuba, and timpani. It is also used for the lower notes of the horn along with bass and baritone voices.

A clef is a musical symbol placed on the ledger lines at the start of every piece of music to indicate the names of the notes placed on the stave. It also serves as a reference point by which all other notes can be determined. 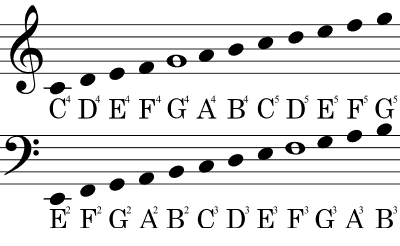 Treble and Bass Clef
The 3 clefs used in modern music notation are:

When the F clef is placed on the 4th line of the stave, it is called the Bass Clef. It is the only F-clef used in music of the modern era, therefore the names are synonymous. The diagram shows the F-line (F3) passing between the 2 dots of the clef.

Notes on the Bass Clef

Video Presentation: Understanding and Identifying the notes on the Bass-Clef by MrTheoryGuy