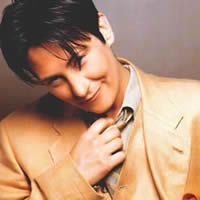 K D Lang is a singer/songwriter, born in Canada in 1961. Some of her hit songs include:

Crying, recorded with Roy Orbison in 1989. Together they won the Grammy Award for Best Country Collaboration with Vocals.

Shadowland released in 1988 and named album of the year by The Canadian Country Music Association.

Full Moon Full Of Love released in 1989 was the single from her album, Absolute Torch and Twang. It charted in The USA and went to number 1 in Canada. It also won her an American Grammy Award for 'The Best Female Country Vocal Performance'.

Constant Craving was released in 1992 and won the award for 'Best Pop Vocal Performance'. This hit song came from the album Ingenue, where Miss Chatelaine was another hit song from the same album.

K D Lang collaborated with other musicians on various projects such as: So In Love for a Cole Porter Tribute Album; Surrender for the James Bond film 'Tomorrow Never Dies', and she wrote music for the soundtrack to Even Cowgirls Get The Blues.

... a special moment shared by K D Lang and Leonard Cohen at a live performance. 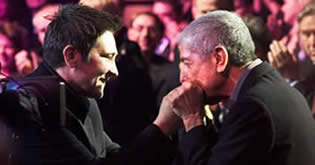 Drag was released in 1997, and 2004 saw the release of the album, Hymns Of The 49th Parallel which did very well in both Canada and Australia.

She has since released other albums and collaborated with other musicians, most notably Tony Bennett with What A Wonderful World. Together they toured and won a Grammy Award in 2004 for Best Traditional Pop Vocal Album.